If most genes are only associated with hair loss, but don’t necessarily cause it… Then what is the cause?

It turns out that while we can’t change our genes, we do have the power to turn genes “on” or “off”. Researchers now believe disease development has less to do with our genes, and more to do with which genes our body actives or deactivates. This is called gene expression – or when our cells turn combinations of genes on and off to perform certain functions.

To understand the potential of epigenetics, let’s look at a few examples of just how easy it is to change gene expression, and just how transformative those changes can be.

We’ll start with agouti mice – a mouse breed once believed to be destined to a life of obesity due to their genes. Then one experiment changed everything.

Is it possible to stay 100% healthy even if your genes “relegate” you to a life of disease? In the early 2000’s, researchers set out to uncover the answer.

They set up an experiment with a certain type of mice called “agouti” mice. Agouti mice are genetically doomed. They have a mutation in what’s known as the “agouti” gene – a gene that determines fur color. Normal mice vary in color from brown to black. But this mutation makes agouti mice yellow.

But they’re not just yellow. One look at these photo and you’ll notice something else:

These agouti mice are also obese, ravenous, and far more likely to die prematurely from heart disease, cancer, and diabetes. It’s a mutation that, in extreme cases, is known as a “lethal allele” – a gene variant that causes early death in the animals that have it.

You can’t change your genes. So does this gene guarantee agouti mice to a life of disease?

Researchers decided the best way to answer this was to see if they could influence the agouti gene’s behavior.

The team believed that if they could give mega-doses of certain nutrients to an agouti mouse during its early development (ie: while it was still inside the womb), then maybe those early nutritional gains would help the mouse live longer. Agouti mouse would still be born yellow, but maybe they wouldn’t be so overweight or die so young.

So they split up their agouti female mice into two groups, fed them each two different diets, then impregnated them.

This was a longevity study. It would take years for researchers to track each baby’s weight, length, development of cancers, and finally their age of death. In short, no one expected any surprises during the birthing stage. But that’s just what happened.

A Birth Of Surprise 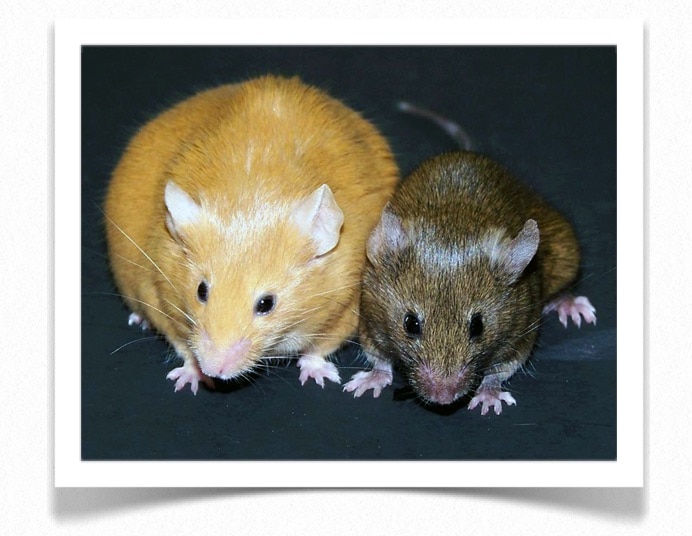 These siblings are genetically identical. How can they look so different?

The group of agoutis fed mega-doses of nutrients defied genetic destiny. They were supposed to be born yellow and overweight. Instead, they were born brown and skinny – just like mice without the agouti gene mutation.

How is this possible? The agouti gene is unchangeable. It destines agouti mice to be yellow and fat. “You can’t fight genetics,” as my barber said.

Except you can. Here’s something doctors don’t mention about genes: they can become activated or inactivated. That’s what Epigenetics is – the study of gene expression. And this agouti mouse study was a breakthrough. Why? It proved we could control gene expression. We can turn off the gene that makes mice yellow and fat… using only better prenatal nutrition.

This is possible through a process called methylation.

Gene Expression & Methylation: Why Our Bodies Turn Genes On And Off

Before conducting the agouti mice study, researchers uncovered that the agouti gene – the gene responsible for agouti mice’s yellow coat and obesity – was “unmethylated”. What does that mean?

It means in the yellow mice, the agouti gene was always “turned on.” It was always activated inside the mouse’s cells.

Researchers also knew that methyl donors – compounds found in certain foods – could potentially “methylate” certain genes – or turn them off.

How Does Methylation Alter Genes Expression?

To put it simply, inside every cell is DNA, and inside DNA are genes. When we eat food, our cells break down that food for energy. If that food also contains methyl donors, those methyl donors will also enter our cells and leave behind small chemical tags on top of our DNA. These chemical tags tell the cell which genes it should turn on or off.

For a fascinating overview, see this flowchart.

These researchers thought that if they fed pregnant agouti mice enough methyl donors, maybe those methyl donors would “methylate” the agouti gene, and in doing so, dim the gene’s effects on the mother’s babies.

They did, and beyond all expectations.

The diets high in methyl donors not only methylated the agouti gene, they turned it off completely. What’s even more interesting, when those brown, healthy agouti offspring reproduced, they passed down their coat color! Their babies were also brown.

These results changed our understanding of genetics forever. Even before the Human Genome Project was complete, another research team had already rewritten its biggest assumption. You can control your gene expression. Genes might be your body’s blueprints, but genes do not determine your destiny.

The researchers published their study in 2007, and within the year, interest exploded in what is now known as Epigenetics – the study of the factors that influence our gene expression.

It turns out these factors extend far beyond the prenatal nutrition of agouti mice.

How Epigenetics Can Save Your Life

This is an example of an Additional Sidebar

In Sensible Pro 2.0, you can choose from 5 additional sidebar pages. You can literally put any content you want in this space. Just go to your widgets section and you can populate sidebar pages 1-5. It is really that easy. You can have 5 different pages that have 5 different sidebars. How cool is that?
Links de Redes Sociales & Contacto